Drug delivery into muscle using an autoinjector, akin to the EpiPen used to treat serious allergic reactions, is faster and may be a more effective way to stop status epilepticus, a prolonged seizure lasting longer than five minutes, according to a study sponsored by the National Institutes of Health. Status epilepticus is a potentially life-threatening emergency that causes 55,000 deaths each year. Anticonvulsant drugs are typically delivered intravenously (IV) as a first-line treatment.

Starting an IV in a patient experiencing seizures can pose a challenge for paramedics and waste precious time. Giving an intramuscular shot is easier, faster, and more reliable, especially in patients having convulsions. The researchers sought to determine whether an intramuscular injection, which quickly delivers anticonvulsant medicine into a patient's thigh muscle, is as safe and effective as giving medicine directly into a vein. The study, which was carried out by paramedics, compared how well delivery by each method stopped patients' seizures by the time the ambulance arrived at the emergency department.

The investigators compared two medicines known to be effective in controlling seizures, midazolam and lorazepam. Both are benzodiazepines, a class of sedating anticonvulsant drugs. Midazolam was a candidate for injection because it is rapidly absorbed from muscle. But lorazepam must be given by IV. The study found that 73 percent of patients in the group receiving midazolam were seizure-free upon arrival at the hospital, compared to 63 percent of patients who received IV treatment with lorazepam. Patients treated with midazolam were also less likely to require hospitalization than those receiving IV lorazepam. Among those admitted, both groups had similarly low rates of recurrent seizures. The study appears in the Feb. 16, 2012 issue of The New England Journal of Medicine. 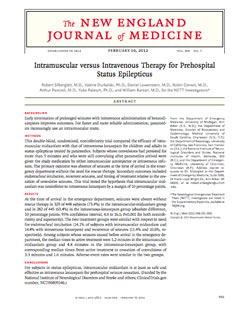 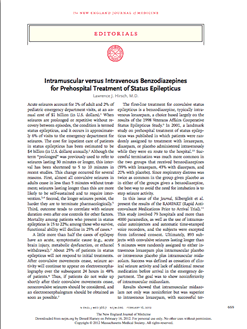 How NETT is Organized
Directory
Announcements
Publications
Newsletters
Who to Contact